A long time ago, when I was a senior in college, I made teapots that were covered in clay roses.  I was a studio art major with a concentration in ceramics.  My father, also an artist, had made a clay rose for my mom for Valentine’s Day one year.  That being my inspiration, I thought I would try my hand at making them myself.  After hours of making clay roses, I got pretty proficient.

But, once I went to graduate school, I abandoned them, at least for a few years.  Two years ago, as I was getting ready for a show at the Genesee Pottery Fire House Gallery, I started to make them again.  My idea was to make piles of them, and have vases sitting on top of them, like a wreath around the bottom.  It was a pretty high expectation to finish them in time for the opening.  I was also 8 months pregnant, and teaching full time.  I realized that it would be acceptable to only show my pottery for the exhibition and try using the flowers in another way later on.

The flowers have lived in a metal mixing bowl for about a year, and they finally have a home, at least a temporary one on display in our living room.

They are just bisqued, with no color.  I have thought about adding color in some way, but I think they are fine the way they are, at least for now.

There are roses, peonies and carnations all mixed in together, with a few leaves and buds sprinkled in there too.  The antlers were a gift from my brother-in-law.  He and his father found them on their farm years ago, and he gave them to me last year.  I think they are a nice compliment to the plaster work on the mirror and to the natural cream color of the clay. Thanks Tristan! 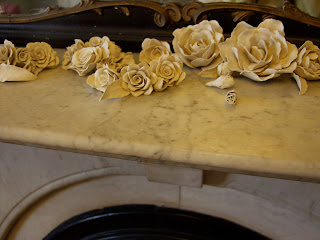 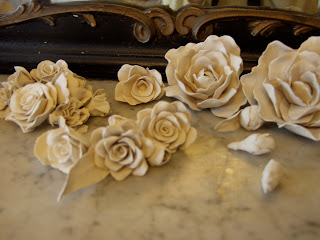 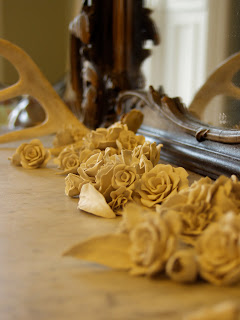 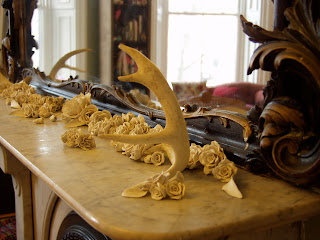 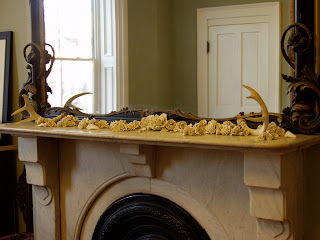 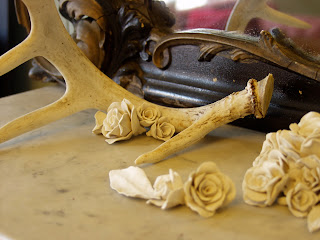 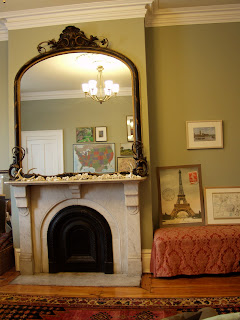